Experience a new type of Laser Tag Arena as never ever seen before in Canberra. With State of the Art Equipment, Laser Effect and awesome theming.

Lost World you can compete with up to 24 of your friends for Bragging rights to see who is the best of the best. The arena is themed with an exploding car, plane wreck and Temple feature allowing awesome phasor shots from multiple areas. If you are young or old you will break out in a sweat after playing the best Laser Tag in Canberra.

Remember it’s not just a game. 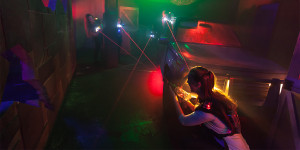